at Wat Thep Nimit over looking Chiang Khong, the Mekong and Laos. 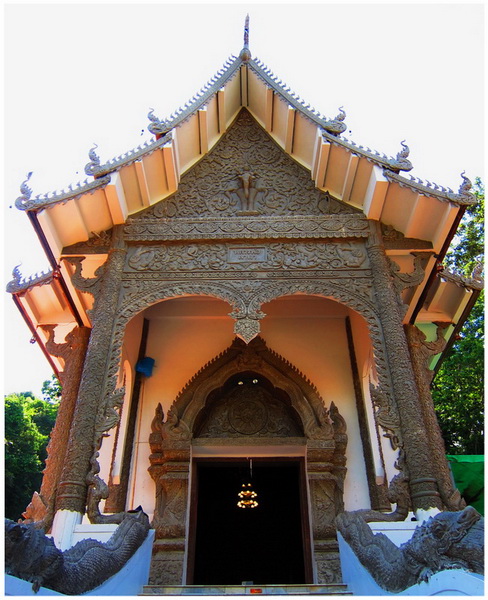 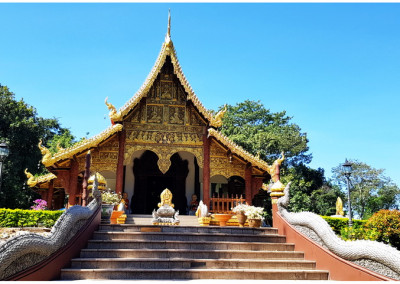 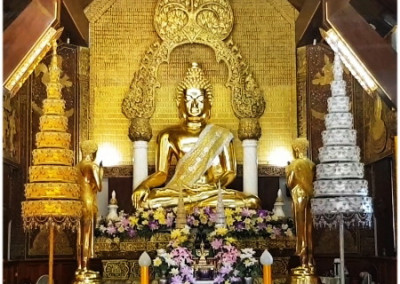 Legend of Phra That Pha Ngao:
Khun Pha Phing or Khun Phing (Phra Phing), the ruler of the Yonok city, 23rd year of the year 494 – 512, built the pagoda on a large rock at  Doi Chan Mountain. The builders of Phra That Chom Chan and Phra That Chet Yot on “Doi Kham” and “Doi Chan” respectively when Khun Lang ruled the town.
“Wiang Peik Sa” (Chiang Saen now) during the year 996-1007, he persuaded the people of the city to help build a pagoda on the top of Doi Kham. Today it’s called
“Tad Chan”. This stupa refers to Phra That Chom Chan and Phra That Chet Yot. The base is about 5 meters. 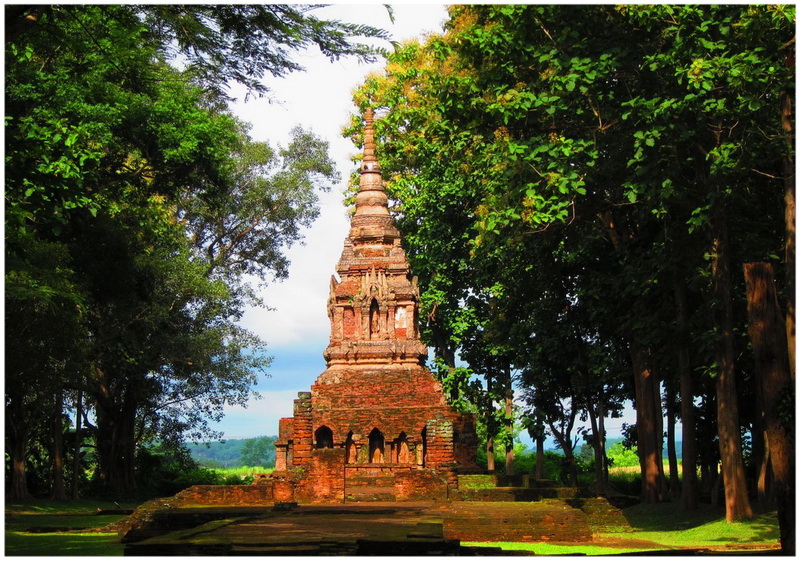 Chiang Saen is an important entrepôt for Thailand’s trade with other countries on the upper part of the Mekong River.

According to an ancient chronicle,[ the original city of Chiang Saen was built in 545 CE in an area called Yonok by Tai migrants from the Chinese province of Yunnan, and was an important city (Southeast Asia Mandala-model mueang) of the Lanna Kingdom. No reliable written history of the city exists until the arrival of King Mengrai in the 13th century. His grandson, Saen Phu, ruler of the Lanna Kingdom, founded Chiang Saen in 1325 or 1328.

The city was sacked by Chao Kawila of Chiangmai during the reign of Rama I, because it had been the Burmese base of operations in the preceding years. The city was deserted, while its inhabitants resettled in other Bangkok-allied Lanna cities such as Lampang and Chiang Mai. Several ancient ruins are found in the old cities. For example, Wat Pa Sak hosts a well-preserved Lanna-style phrathat. 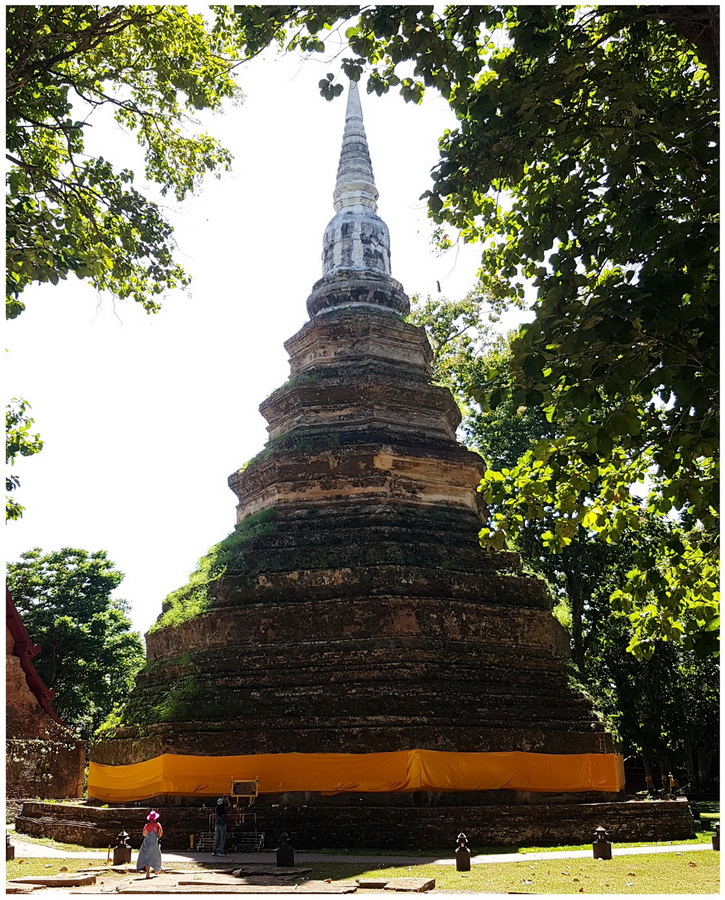 This area is where the borders of Thailand, Laos, and Myanmar meet at the confluence of the Ruak and Mekong rivers. The name “Golden Triangle”—coined by the CIA —is commonly used more broadly to refer to an area of approximately 950,000 square kilometres (367,000 sq mi) that overlaps the mountains of the three adjacent countries. 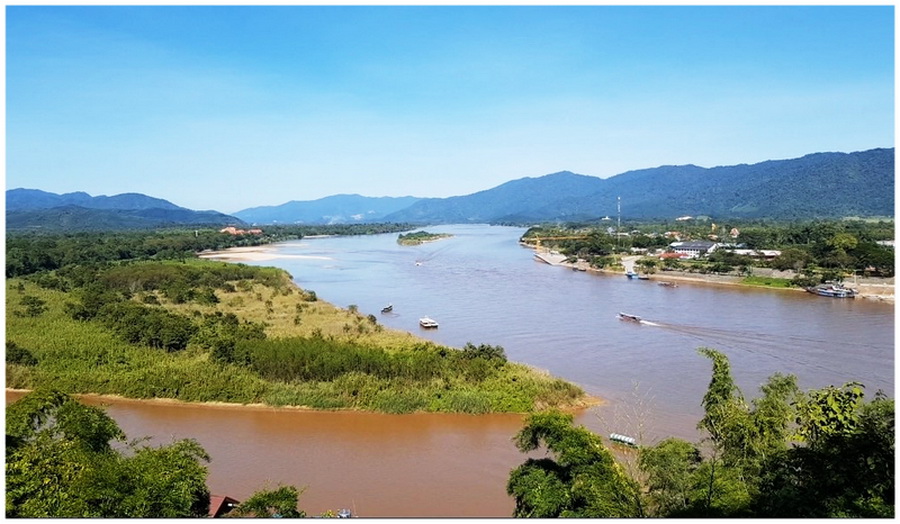 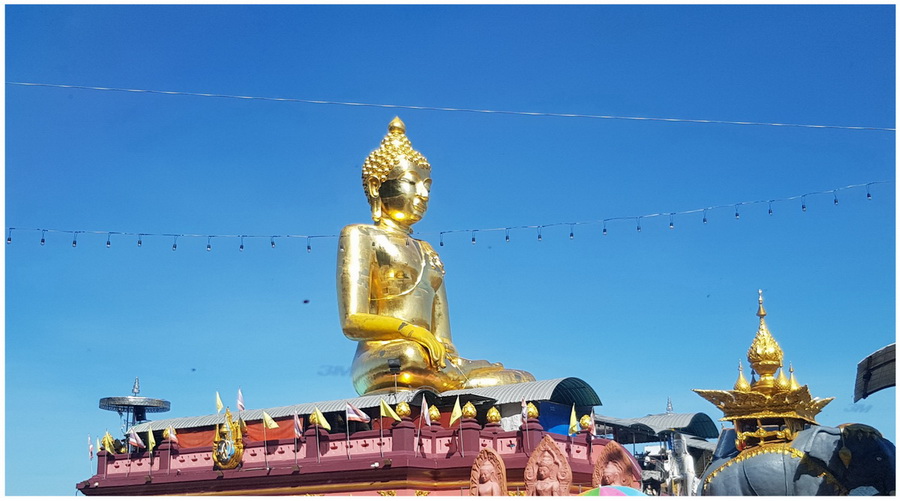 Ruak River and Mekong River confluence, all 3 countries Thailand (bottom), Myanmar (central) and Laos (right) meet with each other, seen from the village of Wiang

The Golden Triangle region, a large area covering Southern Myanmar, Laos, and Northern Thailand, is notorious for the production and trafficking of opium and other illicit drugs. Millions of people visit the area on the banks of the Mekong River where these 3 countries meet and, in earlier times, would have seen little more than a sign with the name “Golden Triangle” and rows of shops. In 1988, Her Royal Highness the Princess Mother visited the area and wished to initiate a program to educate people on the background of opium in the Golden Triangle and elsewhere in the world. While the Doi Tung Development Project has helped solve the problem of the supply of drugs, the Princess Mother recognized that the fight against drugs also needs to address the demand for drugs. The Hall of Opium was created to help reduce the demand for drugs through education.  ( Based: Museum Thailand )